I ran into my neighbor across the street yesterday afternoon.  She told me that for the past couple of nights some men have been walking down our court looking into our cars.  She said her husband saw one of the men was taking pictures with his phone.  Rat Bastards are up to no good, I'm sure.

Really, I can't believe that her husband didn't say anything.  If it had been me seeing them out there, I would have asked them "WTF?, do you live here? What are you doing? etc etc.  But then I have problems keeping my big mouth shut.  Shit just keeps falling out automatically without me thinking.

Do people not take responsibility for ANYTHING anymore?  I guess everyone is waiting for something to happen and then hopefully the police will do something about it.  By then it will be too late and the damage will have been done. Meanwhile, there is a great deal of bitching going on!

After chasing a mortgage in Gainesville this morning, I will stop by Lowe's to see if they have a motion sensor activated flood light that I can plug in through the kitchen window.  It looks something like this: 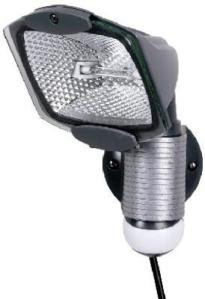 I had one of these years ago when we had this problem and it worked very well.  It even chased away a guy who had a protective order against him from bothering a woman across the street.

Meanwhile, we removed our GPS' from our windshields last night and I had T-Jay move the xB in front of the door since his alarm doesn't work anymore.  We would have a fit if his 5K sound system was ripped out of that xB.  My xD is still  pretty much stock except for the security system and automatic start, so I parked it across the street.