I was scheduled to work from 9 AM until 9 PM yesterday, but it slowed down to a crawl by 6 PM, so I got to go home early.  Just enough time to cook some Fava Beans and Carrots in butter and some pork chops with awesome gravy.  I added a small pot of rice to go under all that awesomeness. :) 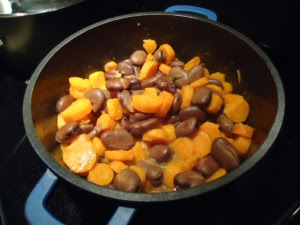 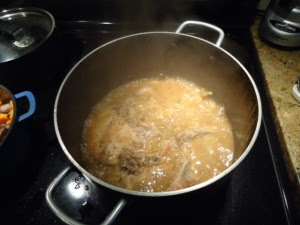 Looks like I got a mom in a nest in my maple tree. 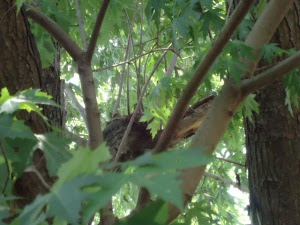 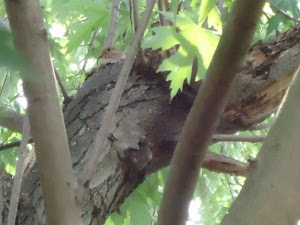 The black bird that was living in my wall seems to have raised her children and has moved on.  Whoohoo....no more scratching and knocking at sunrise. :)
It had been a year since I got 19 teeth pulled in one day.  Since then I had a temporary set of dentures to wear.  During that time I had the worst time chewing my food.  Well, last Tuesday, I finally got my permanent set.  What a relief.  My gums shrunk quite a bit in the last 12 months and the new set fits so much better.  I am finally able to chew my food. :) Ha, I might even be able to eat raw veggies again.  There is a bit of pain due to rubbing, but I'm hoping that I just need to get used to them.  If not, I'll go back and have them adjusted.  Was it worth it?   Hell yeah, it sure is great not to have to deal with tooth aches anymore. :)

It looks like most people around here have their power back on after the storm last weekend.  I talked to my mom earlier today.  She told me that hers came back on late yesterday.  Five days without power for her and her hubby.  I feel bad for those people that are still waiting.  Luckily we have our power lines underground here and the lights just flickered a couple of times during last weekend's storm.  The worst thing for us was that Verizon was down and we had no phone for most of Saturday.

I had a car chase to do this morning.  I was hired to find the owner of a Toyota in Haymarket, VA.  Before I go on a chase, I always research the name and address of the person that I'm looking for.  It amazes me that after all these years of Facebook, people still do not seem to pay attention to their privacy settings. I found the person that I was looking for, her employer, employer's address and phone number, how long she has been working there, a photo of her at her employers website, where she lives now, whom she is living with, that she is divorced and has a daughter, what school her daughter goes to, that she had no power after the storm, that a tree was down on her street, that she has a 90 year old grandmother that she took to Target to cool off etc, etc, etc.....  Needless to say, I found the car.  When will people learn to lock their Facebook page down????