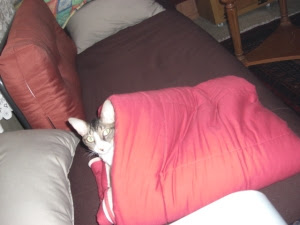 Time is going by and before long it will be time for me to move.  Sigh...still not really feeling it, but I guess I better.

Every time I get sad about it, I keep reminding myself of the "bright side".  Maybe listing them will help?

1.  Less than .06 miles to work instead of 10 miles twice a day.
2.  The chance of getting snowed in or snowed out is about 0.
3.  On my long days at Millers, I can go home and grab some lunch instead of taking stuff with me.
4.  Driving home in the rain and having halo and glare issues, won't be a problem.
5.  Won't have to winterize the townhouse.
6.  Won't have to worry about running out of popane for heat and hot water.
7.  The Evil Twin will stay cleaner since it will be parked on asphalt.
8.  I'll be closer to stores, but they won't have anything that I eat.
9.  I'll be hooked up to cable, but my TV mostly watches me and is on for noise.
10.  It will be between 6 and 10 degrees warmer in the winter.
11.  Lots of privacy.
12.  I can do my laundry without leaving my home.

The Not So Bright Side:

1.  Lots of city noise, ambulances, fire trucks, police, close neighbors
2.  It never really gets dark.
3.  Four more people under one roof.
4.  Sharing the bathrooms and the kitchen.
5.  Driving 10 miles to get food.
6.  Having to make friends with new connections to get fresh food close by.
7.  It will be between 6 and 10 degrees hoter in the summer.
8.  Less privacy
9.  Noisy neighbors
10. Yelling at neighbors children that insist on playing in our front yard.
11. Unsupervised neighbors children.
12. Having to comply with the HOA
13. Having to clean up after neighbors so that my home doesn't look like crap because of them.
14. Having to organize neighborhood trash pickup, because people seem to like to shit in their own nest.

Shit!  This is NOT helping at all, it's downright depressing.

On to other things.  I need to finish one report today or early tomorrow morning for a commercial inspection from last week.  I made the mistake of taking a ton of photos, so it's going to take a while to organize.

Today I started to load a few things in the Evil Twin.  I figure it doesn't make sense to drive to Manassas every day and not take something to the townhouse.  At least things that I don't use on a daily basis.  It will make things less stressful when it's time to move.  I'll stop and drop it off later before going back home.

T-Jay is starting to get excited about his move to Atlanta.  He's beginning to think about the things that he wants to take and the things that he wants to leave behind for now.  His train ticket came in the mail last week.  I love trains,  he's never been on one.  The trip will take around 12 hours, but being on a train he can at least move around.  I truly hope that he will be happy there.  I'm going to miss him though! :(