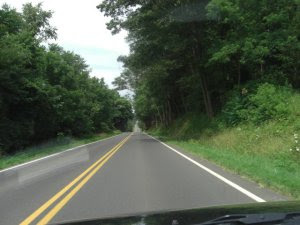 So after two days, I found the house that I needed to inspect. It took talking to the RIGHT person in the zoning department. :) The house HAS a physical address and YES, GPS can find it. I was so relieved, as this was getting on my last nerve. I knew that the county would have to know if there was a house on the land and would also have to have an address for it. Ha, you know they wouldn't miss out on their taxes. ...anyway, that's over with. I just have to upload the pictures and then I'm done. I also printed up a map of the land and the house so that the next field inspector won't have to go through this crap. I'll take photos of them and upload them too.

Some of the banks sure are getting slick as hell.

After I found the house and took a ton of photos, I stopped by the UPS store to see about my mail. In the stack of envelopes is one from the bank. A letter in there tells me that my balance is $-350.21.
I'm going WTF??? and walk to the corner to the bank.

The teller that set up this account told me that the bank had approved a $300 overdraft protection for me. I showed her the e-mail on my phone and ask:

Teller: "That department doesn't have the same information that we have yet, you are now $350.21 overdrawn."

Me: "How is this possible? My card has not been declined."

Teller: "It's because of the overdraft protection."

Me: "Okay, so if I have $300 overdraft protection, why am I being charged $34 per transaction that is overdrawn and why is my card not being declined?"

Teller: "Oh, I don't know what happened, let me change the number right now. No wonder I couldn't reach you. I also wanted to tell you in person, but every time you came in, I forgot to tell you."

Me: "Okay...so, getting back to the e-mail to notify me when my account gets below $50, what happened there???"

Teller: "I don't know. We don't do that here. It's another department. They get the information later than we do."

Me: "I want you to take off that overdraft protection now!!"

Teller: "Okay, but once we take it off you will never be able to get it back."

Me: "Doesn't matter, it's useless!! This is crazy, you want to give me $300 to use so I won't be overdrawn and when I use it you want to act like it's really not there and punish me with charging me $34 for each transaction. This doesn't make any sense, just take it off!"

What a fucked up ending to a beautiful day!!