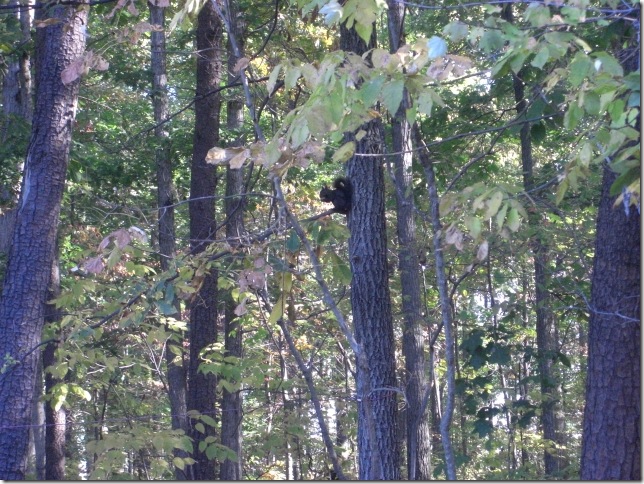 Can you see the black Squirrel on the tree?  That’s the first time I’ve ever seen one in black.  LOL….Do they taste the same as the brown ones?  MMMMhhhhh…..baked in the oven with sweet potatoes and collard greens.

I chased a mobile home in Chantilly this morning.  It’s weird how the GPS will take me there one way, but takes me back another way.  WTF?  I don’t get it, it’s not like the route gets longer or shorter on the way back.

When I got back home I cleaned house…lol, that took a whole 30 minutes.  I love having a tiny home. I was thinking about wiping down the Evil Twin, but they’re calling for a 70% chance of rain tonight, so I won’t bother.

I’m still debating on using straw bales or hay bales to insulate the bottom of my trailer.  I’m thinking about setting out all the tarps that I used last year and laying them on the ground.  Stacking up the bales on top of the tarps and then wrapping the tarps over the bales so that it won’t look so crazy.  It will also keep the bales from getting wet.  The weight of the bales should keep the tarps in place since duct tape doesn’t hold up when it gets below freezing.

I’ve been looking around for the most inexpensive bales that I can find.  It looks like hay bales are more expensive due to it being used for feed, so I’ll go with straw.  I know some people in Bristow that sell straw, so I’ll check with them to see how much it has gone up over the past year.  Last year they were $3.50 a bale.

I’ll have to stop somewhere and measure a bale so that I can figure out how to set them up.  Laying down, sitting on end, or sideways.  Once I figure that out, I’ll see how many bales I need to go all the way around the bottom of the trailer.

Okay….I’m back.  I went to Buckland Farm Market and bought one bale of straw. I also talked to Bill about what I was planning.  He told me that he does the same to a trailer that he uses in the winter and that it works great.  Bill suggested that I come to see him right after Halloween and let him know how many bales I would need.  Thanks, Bill!! :) 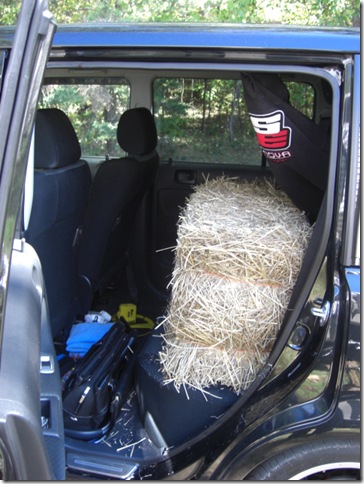 LOL…..I actually could have fitted four bales in the Evil Twin, if I had to. 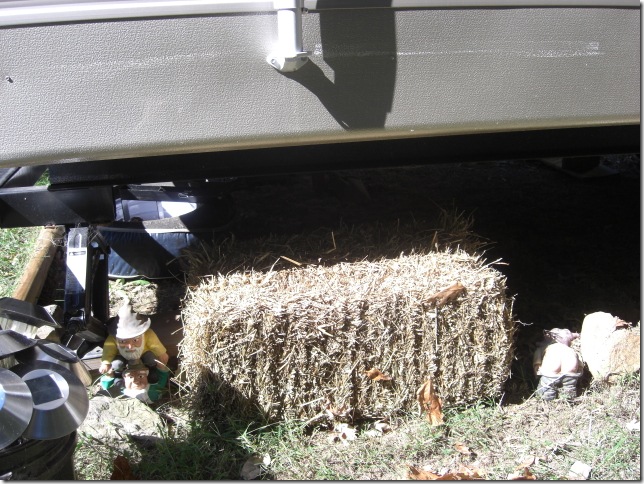 Each bales is 30 inches long and 15 inches tall, so two on top of each other should do it.  My trailer is 384 inches long and 144 inches wide, I’m not counting the slide outs.  I’ll go underneath them.  It should take about 72 bales……right? 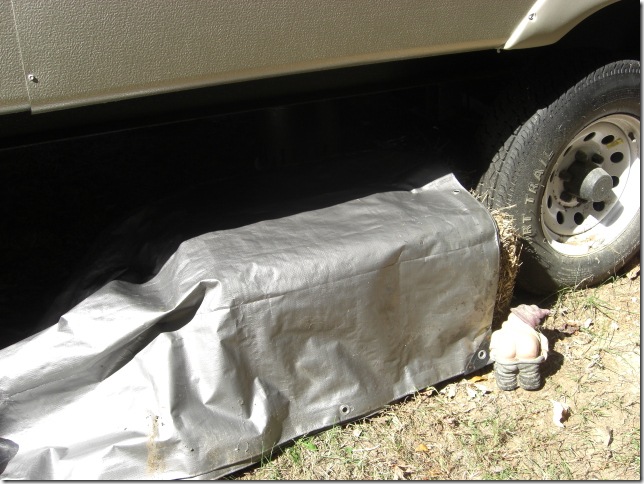 I think I will use the other side of the tarps, which is brown.  I would have two bales on top of each other, then kind of wrap them in the tarps and wedge them under the trailer.  Well, that’s the plan anyway :)

What do you think?