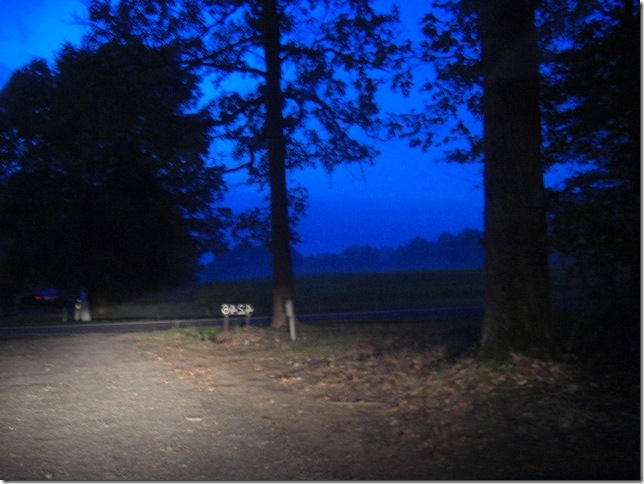 I took this one the way out at the crack of dawn this morning.   Should have turned off my headlights….oh well.

By 7:40 I was sitting in front of a house waiting for 8 o’clock so that I could knock on the door.  LOL…That’s a good time to catch up on all my e-mails, text messages, and Facebook.   After I finished the car chase, I had a 40 minute drive to Millers.  At lunch time I did another car chase.  Then at 7 PM another and then home.  It’s been a long day.  Just finished uploading the photos and reports. I won’t be doing  car chases after work on Saturdays anymore, since it gets dark soon after 7 PM and the photo taking isn’t that great in the dark.

I was trying to get all the car chases out of the way so that I would have tomorrow off….but nooooo.  I’ve got one lined up first thing tomorrow morning.  After that I’ll pick up T-Jay so that he can help me with getting my trailer skirted and hoses insulated for the winter.

Things were slow at the dealership today. I guess everyone was out and about enjoying the weather. After I finished my work I spent most of the day catching up on a blog suggested by Guy this morning.  I truly enjoyed it, Donna, I spent most of the day on your end. :)  How’s that fender coming along?  Now I want waffles, which I haven’t had in ages……and fresh milk and butter straight out of a cow which I haven’t had since 1968.  I remember helping herd our neighbor’s cows every morning before school to get milked.  We would get an aluminum can of milk.  My Mom would put it in a bowl and she would skim the cream off the top to put in our cups of hot tea.  LOL….. tea time was 5-6 times a day.  Now I wonder if the entire population of northern Germany is chronically constipated due to all the tea that’s consumed there.

Time to get Silly and my popcorn fix.  Then relax a bit.

Hope everyone has an awesome Sunday. :)