Locked out of the Evil Twin 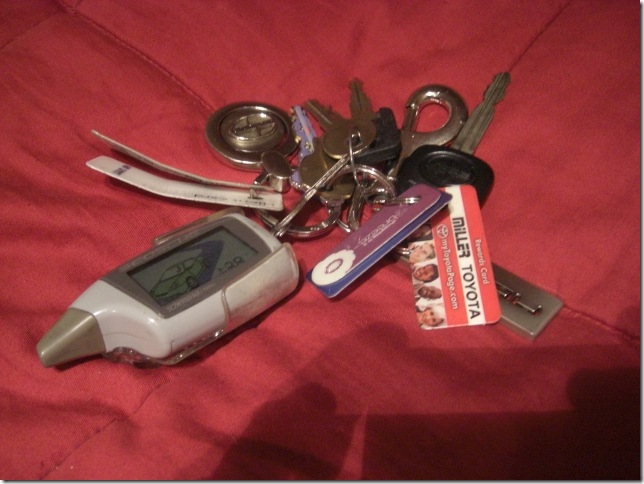 Yesterday my dear son, T-Jay stopped by to borrow the Evil Twin, so I gave him the keys that I keep attached to the loop of my belt on my pants.  There is a set in the car that I put in the ignition and then there is the set that stays on me at all times which has the remote for the alarm on it.

He came back when it was time for me to get off of work and he then drove me to the store and then to his home.  This is were he got out and I got behind the wheel.  I didn’t think to put the other set in the ignition and the set that was in there at the time back on my belt loop.

So I’m driving home in the rain thinking about writing my report for the commercial inspection I had done earlier.

When I got home I did as I always do, take the keys out of the ignition and put that set in between the seats.  I always lock the door manually without arming the alarm at home because I don’t want the alarm to go off and wake up Kenny, Cyndi, Aaron and the kids in the middle of the night.

As soon as I closed the driver’s side door, I realized I had locked both sets of keys in the car.

Luckily I had given Kenny a set of keys to my trailer when they were first getting my home hooked up and ready to be lived in.  I knocked on the window and asked Aaron to get me the spare keys.  I felt so bad about knocking at this time of night.

When I got in my home, I called T-Jay and asked him to call himself a cab to get over  here with HIS spare key.

Meanwhile I’m trying to scrape enough cash together to pay for the cab fare.  I was rolling quarters, dimes, nickels and getting old coins that I had saved for many years.…. I managed to scrape up a total of $28.40.  I’m thinking 25 bucks ought to take care of it since it’s only about 12 miles to my home.

Before the cab got here, T-Jay called me and told me that the fare would be 50 bucks.  50 BUCKS….WTF???  I asked him if he takes credit cards, but no.  So the cab driver says that he will drive me to the nearest ATM to get the rest of the cash together and I told him okay.  I didn’t have much of a choice, I needed my car for this morning.

A few minutes before T-Jay got here, he called me again and said that the driver would accept the $28.40 for the fare.  I was too relieved to ask “WTF?”  I had a feeling that the driver was just pulling a number out of his ass when he said 50 bucks!

Anyway….T-Jay helped me get into the car by pulling the plug that covers the keyhole with a screwdriver by the light of his Blackberry.  Yes, all my flashlights were on dead batteries.

It was still raining when I drove T-Jay back home and I got back at quarter to midnight.  I still had to do my report and upload my photos.  I managed that by 12:15 AM and I’m hoping that they won’t dock my fee for being 15 minutes past my deadline.

Of course I was much to wired to get to sleep at a decent time.

I can’t believe I’m still up posting this, but I needed to get this rant off of my chest.  Time to hit the bed, I’m beat.  Hoping that tomorrow will be a much better day.