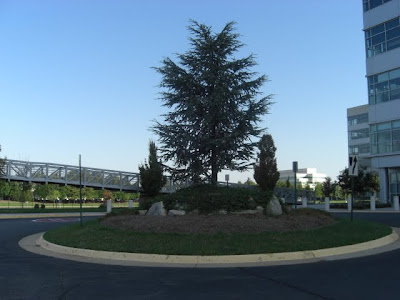 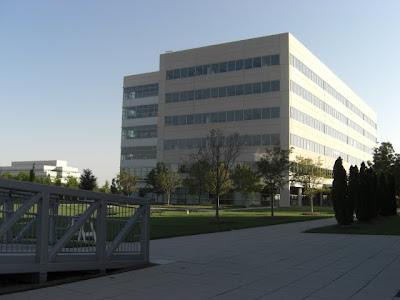 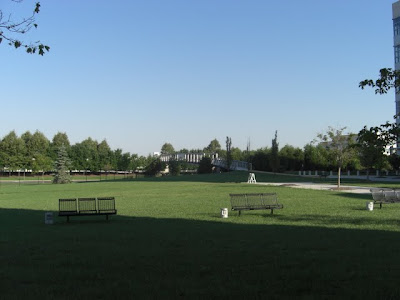 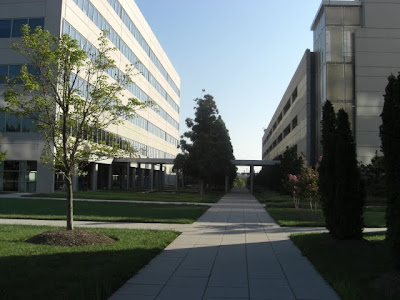 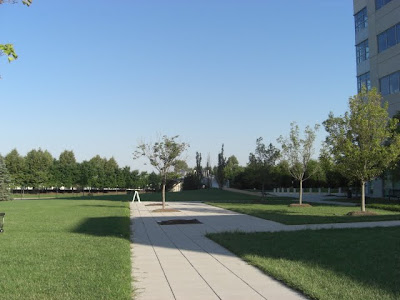 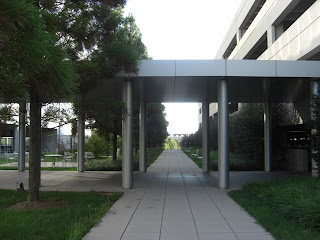 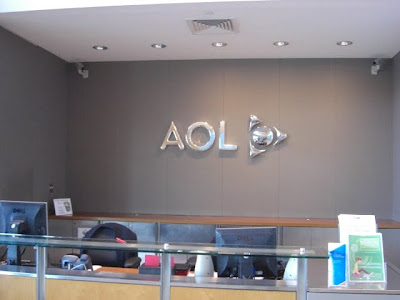 AOL in Sterling, VA
I left at 7 AM to make it to my appointment at AOL in Sterling by 9.  Traffic was a pure unadulterated bitch and I got there at 8:45.

The grounds of the AOL looked pretty awesome, so of course I had to take pictures. :)

Getting inside was another matter.  Security guards at the entrances.  They couldn't find my name until I gave the officer my driver's lisence so that she could see it in written form.  Finally she found out that I was supposed to be there and told me to go ahead and have a seat.  The waiting area was now empty except for me and you know how I am, I had to take a picture of the AOL logo on the wall.

30 seconds later the security guard came in to tell me that photos were not allowed to be taken.  I apologized and took out my camera, pushed a few buttons and then showed the guard that the camera had no pictures on it.  He was satisfied.

My questions for the Research Study took all of 40 minutes. It involved using the aol search engine, which I never use, and finding my way around it.  I think they should have used examples of things that I would deal with on a search, but they used NFL and vacation luxury resorts in Mexico or Jamaica.  Neither of which I have any interest in.  After it the woman was finished she handed me $75 worth of Traveler's Checks.

From there it was off to Leesburg and getting lost for over an hour.  I couldn't use my directions because one of the main roads was shut down for repairs and my GPS was not cooperating at all.  Being a woman...lol...I did stop for directions, but got the same answer every time, "It sounds familiar, but I coulnd't tell you how to get there".  It got to the point where I could see the subdivision from a distance, but couldn't find a way into it.  I ended up going by Leesburg Toyota since I know people there and one of the salesmen gave my a work-around for the construction area.

After that I went to Manassas to a mobile home park. I was asked to take pictures, a minimum of 20 of the home and the surrounding area.  They also wanted me to go inside and take pictures, but I refused to ask that of the woman that lived there with her family.

I felt really bad for her.  She has two teenage kids and  works for the US postal service.  Her hours have been cut, and now they are talking about not delivering mail on Saturdays anymore.  She had given up her phone a month ago, which is why the lender couldn't get ahold of her.  She had also just lost her vehicle.  I asked her to use my phone to call the lender.  She did and told the man on the other end that she was using MY cell phone since she had none.  Do you know that he kept her on that phone for 52 minutes?  I was steaming!!!  Ended up that she had made payments, but they had been applied wrong.  In reality she was only a little over a week behind.

LOL...after I got my cell phone back, I didn't even have time to drive to "Hood"bridge for the last two chases.  I hauled ass back home to check on my pussy, change clothes, grab another cup of coffee and head to Miller's.

Oh...in case you're wondering where those pictures came from......I always bring both my cameras and they both fit into my pants pockets. One does really good with a flash for low light areas, the other does really good on close up details like VIN and serial numbers. Well anyway, I let the security guard see the camera that I had not used. :)