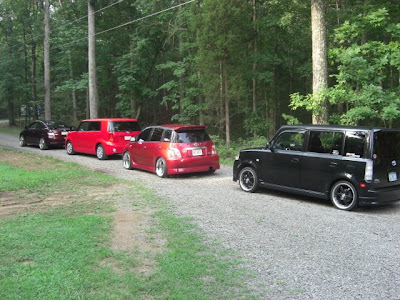 There we are, lined up in front of the house, getting ready to leave for the show Getting to the show was no problem, the traffic was kind of light. It took us about two hours, with one bathroom pit stop for the kids.

By noon there were over a hundred cars at the show.

It was really, really hot on the asphalt, by late afternoon it had hit 107 degrees on the track and we were parked right next to it. Even though I drank a ton of liquids, I didn't have to pee for 11 hours.

Seeing everyone again was awesome. Lots of hugs, smiles and laughter!

People from all over made it to the show. New York, Pennsylvania, Maryland and Virginia.

There were lots of tents, all put up next to each other. Lots of chairs. This was a good thing since the heat was so bad that we didn't feel like moving around too much.

Scott had brought his folding bicycle and everybody was taking turns riding it.

Jeremy brought a sub and sold it to Kenny. Now Kenny has plenty of boom boom in his trunk.

Pat gave me an LED bulb for my dome light.

Tony and Jeremy each gave me a cigar (yes, I smoke cigars once in a while)

Since Mystic Tattoo had a booth at the show, Jeremy got his eyebrows pierced and tried his best to talk me into getting something pierced too. Good think there was no Grey Goose in sight! LOL...I woke up this morning without any new tattoos or piercings.Jeremy is a mechanic. I hope he won't be in too much pain with the heat and sweat today.

The kids were playing video games from the back of Kenny's car.

There was food, but I never got that far. Tony had brought a small propane grill and was cooking us burgers and hot dogs.

Spent much of the afternoon trying to get Tony hooked up with a girl. We also discussed Tony's fair in his pants....lol...don't ask!

Most of us didn't register to show our cars, but those of us that did, won awards.

Sandra picked at me for wearing black and threatened to get me full of Grey Goose to make me over in color. :(

Scott's alarm wouldn't cut off because the battery in his remote died.

One guy from another club, I'm so bad with names, turned his 1st Gen xB into a miniature strip joint complete with stripper pole. It kind of reminded me of Lexy because every time you look at it, you see something you missed before. Crazy, crazy setup. :) The last time I saw his box, it was completely stock.

Traffic on 495 was absolute hell. We were able to go between 0 to 35 miles an hour for miles. Poor Kenny was leading and trying to keep up together by pulling over to the side to wait for us when we were separated. There was some idiot in a flat pink painted something or other weaving back and forth from one lane to the other trying to get ahead of the blanket of bumper to bumper cars, rat bastard!! I got left behind at one point and didn't catch up to Kenny, Cyndi and Aaron until we got to Manassas.

When we got to Gainesville, we stopped at Taco Hell, eh Bell. The last time I was in one of these was 1983. Ha, things haven't changed all that much since then....except for the menu.

We got home after 7. I got in my door, petted my pussy, tore off my clothes and jumped in the shower.