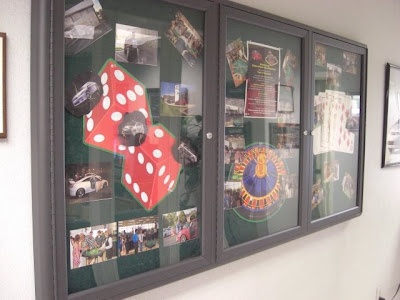 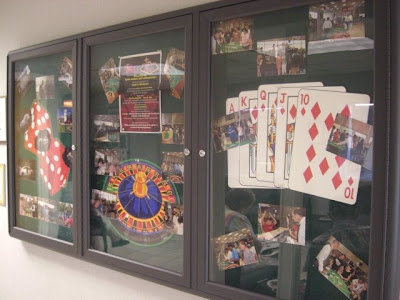 ^^^^Miller's Casino Night...Linda, our finance manager put together photos from that night and put it in the show case in the hallway at Millers. It looks better in person. I'll have to get her to open it for better photos.

Wow...from 79 degrees to 68 degrees in ten minutes. We had a major rainstorm half an hour ago and it cooled things down nicely. I'm sure it will be extra, extra muggy by the time I go to work at 5.

I love the sound of rain on my roof. It just makes me want to slide back into bed. :)

The "Cash for Clunkers" program came to a screeching halt at a little after 8 PM at Miller's last night. Four customers walked out. I had a crazy woman on the phone that insisted on getting in on the deal since she was told it would end at midnight. We ended it right then and there.

So much for this lasting until November. Well, at least our used car department will be happy since they haven't been getting many trade ins for the last week. They haven't been selling too many used cars either.

I got an e-mail from my client about the Tattoo shop last night. They want a drawing/sketch of the inside of the shop, showing each room, hallway etc matching the total square footage of the store.

I was going to try and use Google Sketch to do it, but it won't open on this laptop.

I guess I will be doing it by hand tonight. I'll have to remember to bring my adding machine with me to get it correct.

Earlier I went back to the shop with my measuring wheel and got the data.

I'm having a real hard time losing these last 17 pounds. They don't seem to be going anywhere.

I wonder how much hair under the skin weighs? You know, when you take the tweezers and pull out a tiny stub of a hair and the rat bastard turns out to be half an inch long?? That's got to weigh something right?

I do go through extremes on Mondays when it's time to weigh in.

The before getting on the scales ritual is:

Poop First!!!
Pee out every drop of the coffee that I consumed, making two or three trips.
No food!!!
Take off all jewelry including ear pins.
Shave, shave, and shave some more.
Cut my finger and toe nails.
Dry my body totally after I take a shower.
Dry my hair.
Do not put on any creams before hitting the scale.
Get on the scale naked.