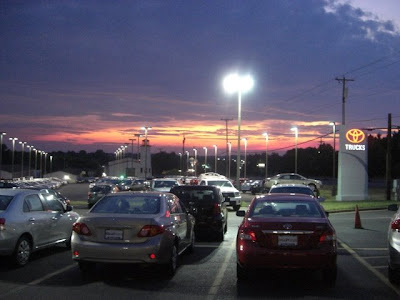 "The Stench" was almost gone yesterday morning so I stopped by a little country store to see if I was losing it.

The store owner told me that every year the farm along this road sprays liquid manure on all their fields.

Weird, because I grew up next door to a farm in Germany. They also did this, but it never smelled like that. I wonder if it has something to do with what the animals are being fed?

I stopped at a "Fresh Vegetables" stand on the way back home. The place was down a gravel road and a flush truck was in front of me watering down the road to keep the dust down. Nice, I wasn't looking forward to removing all the dust from the Evil Twin when I got home.

...anyway, I got to the stand in front of this house. There was no one there, but I got out of the car anyway just to see what they had.

There was a sign next to a metal lock box saying that we are on the "Honor System" and that we are to put the money in the box for what goods we take. The lock box had a padlock on it, but box itself was not secured to the table.

I got a cantalope, a huge zucchini and put my 3 bucks in the box.

Now if I can just get Guy to send me some eggs, I'll be set. I promise to send back the carton. :) I just threw away half a dozen eggs that were dated "use by March 24". I have no idea how long they are good for, but I decided not to use them.

Every day I stop by the black berry bushes with my little bowl to pick what's gotten ripe. For some reason most of the berries are very small. I wonder if something else is eating them up before I get there. They sure aren't producing enough to make black berry butter!! :) Maybe it's to early?

I took the band aids off of my fore head yesterday. It looks like a large bird has been pecking on me. Wonder if anybody is going to ask me what happened when I get to work.