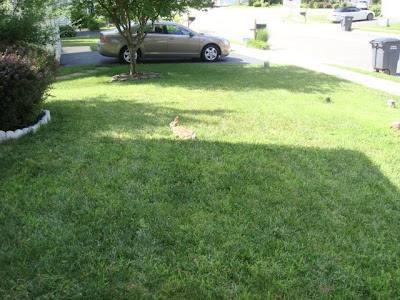 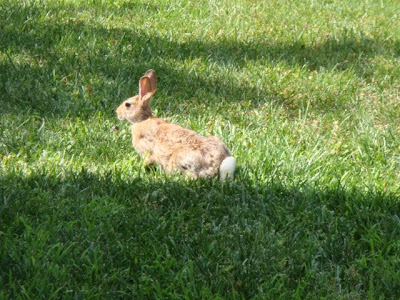 While doing a field chase in Manassas yesterday, dinner was sitting just six feet away from me. :)

I see a lot of deer near my home, but never any rabbits.

I noticed a few red berries on the Blackberry bush last night....won't be long now! :)

Last night I asked every man I saw if they had any fishing line in the trunk of their car, but no :( I've looked everywhere for it in my house. Don't they know that they all should carry around their fishing gear....just in case???

I know I have a roll, but I guess I put it in a very safe place. I'll have to ask Kenny if he has any.

It's been so long since I've done anything to the Evil Twin, that I feel like a kid on Christmas expecting a new toy. Got to get my fix.

Sunday, I will spend the afternoon using one of my favorite power tools.

No Guy, not that one! My orbital double headed buffer.

My Stepfather is hiring me to detail his car. I told him that I would gladly do it for free, but he insisted on paying me. I enjoy detailing a car that has not been done in years. You can really see the difference. I'll have it looking like brand new.

After I finish that, I'll stop by VA Pistol to pick up a check. Jimmy e-mailed me that the P22 sold Tuesday night, much faster than I thought.

He also told me that maybe I should try a universal magazine loader to make the loading of the Bersa easier.

It seems that I get more replies on Facebook between 5 and 9 PM than any time of the day. Not being able to reply at work was getting on my last nerve, so last night I downloaded the Facebook application for my Blackberry Storm. Glad I did, it really works nicely, much faster than going to the website via browser.

Silly is knocked out in my bedroom closet. She was up all night chasing a couple of moths that I accidentally let in while getting in the door. So of course she now has to catch up on her sleep. :)

It's time to clip her nails again. Wish my nails would grow that fast.

Time to hop in the shower. I've got a ton of paperwork to catch up on so that I can get it off my table.

I hope everyone has a great day :)