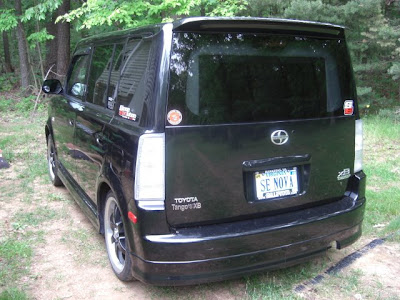 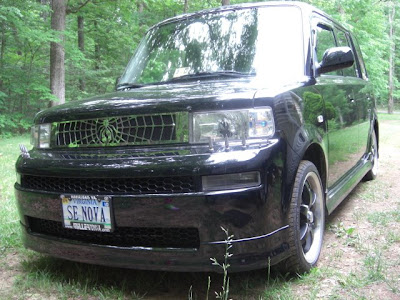 This is why I love my Scion Evolution Car Club Family. They went to a car show yesterday. Afterwards Kenny called me up to tell me that a few of them were going to stop by TGI Friday to grab a bite to eat.

I met up with Kenny, Cyndi, Scott, Jeremy, Lorenzo and Aaron. After we ate everyone decided to see about my tail lights, so we all went to Kenny and Cyndi's house.

After taking the two back panels off, Jeremy managed to get the tail light out. He played around with the contacts and the bulbs and we still don't know exactly what he did, but they work perfectly now.

I am so happy because this was going to get really expensive and I just can't afford it anytime soon. Another thing is, I know sooner or later I would get pulled over and given a ticket for faulty equipment because of my bright white backup lights that would come on randomly.

I can't believe that I only drank ice tea at TGI Friday's ....oh, I did eat two of those tiny little tomatoes that Jeremy didn't want on his salad. At first I was going to order their Spinach Dip, but we were told that the spinach had been recalled....WTF? I just didn't feel like eating else.

I've been sleeping really great and I feel like a million bucks when I get up in the morning.

I posted the information for our Casino Night on seven Scion specific forums yesterday afternoon. In the last 24 hours they had a total of 164 views, which is pretty good for a Sunday. I'm hoping that when everybody goes back to work tomorrow the forums will get busy again.