I probably won't be able to get on here tomorrow, so I figured I'd get something on here tonight.

I got slammed with inspections today so my dear Son is driving for me tomorrow after the surgery. I think I probably could have managed 1 or 2, but not 5. It will be about a hundred miles of travel and I don't know how my big toe will feel after it wakes up.

I had another good laugh today. A lender wanted me to tape a letter to the door at Lockheed Martin. I knew I wouldn't get paid if I didn't manage to do that, so I called in and let them know that I would probably be arrested if I did. They canceled it.

I was fingerprinted for the third time this morning...hopefully this will be it.

One of the guys at work tonight told me that my left tail light is out on the Evil Twin. That really sucks because I'll have to Eddie, he's the one that installed the sound system, to come out and fix it. There is a panel with two 15" monitors and two amps attached to it that will have to be removed to get to the bulb. I sure hope that it won't cost too much. I'll stop somewhere and pick up the bulb. Hopefully this is all that I need.
The picture below shows the panel right before the wrapped it in silver vinyl carbon fiber. Behind that wall are 6 10's. 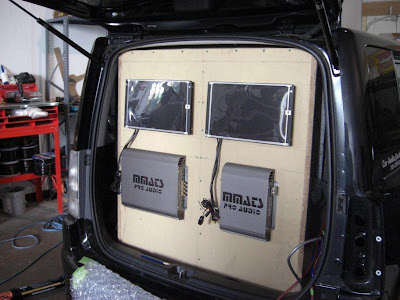 I neglected the poor Evil Twin while I still had Lexy. I'll have to take some good pictures of her when it gets nice outside.

Well...it's off to sleep. (I hope it happens soon)